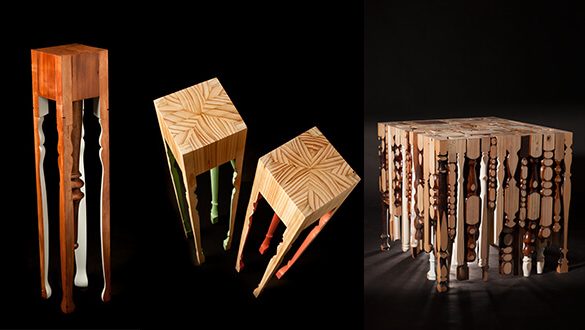 Rupert Herring – Turning the inside out

Our impact on the world is vast, and worryingly — far from the limits of its extent. Some of us question our personal contribution to this on a daily basis, whilst the majority of us carry on without out a second thought, pausing every other week to take out the recycling. Then there is Rupert Herring, for whom recycling isn’t something to do because it’s what we “should” be doing. With a desire to create beautiful objects, a moral obligation to our planet and an aversion to consumerism and our throwaway society he has turned it into his livelihood.

Rupert’s work flirts along a delicate line between sculpture and furniture. Working almost entirely with found material, specifically timber, he sees wonder and potential far deeper than surface appearance and often completely detached from the material’s original use. He aims to answer his own question, “why are we not using up what we already have?” The environment has already paid the price for so much, why take more? Rupert breaks the mould of the in-vogue concept of up-cycling, and far from simply using timber from pallets and whisky barrels, he searches for the beauty hidden in an object’s original form. Through slicing, arranging, rearranging and even turning inside out he finds such beauty.

His work takes time, huge quantities of it, but he finds joy in the monotony of preparation and in the knowledge that the process has begun. The process which creates refined objects of a quality not often realised in found materials. Perhaps its his homage to the time it’s taken for the material to reach him or maybe to the new lease of life that he gives it and the will to make things to last far longer than a human life span. Probably all of the above, but in amongst all that it’s because he is the sort of person who won’t let anything leave his workshop until it’s… ’nice’.”

Rupert Herring has a show at Waiheke Community

Arts Gallery until 22 February. He is exceedingly busy with

commissions and exhibitions.However if you’re happy to wait

awhile, new commissions can be be taken on.