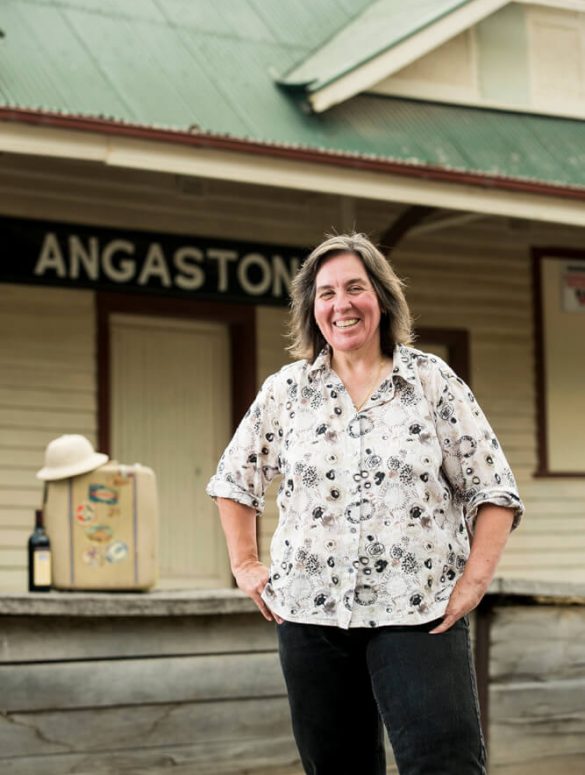 A Teller of Tantalising Tales

“One of my earliest memories is as a kid living in Alice Springs aged around five or six,” says Jane Ferrari, brand ambassador of Yulamba, Australia’s oldest family owned winery. “The absolute best part of the day was bed time because mum or dad would read me a page of the book Snugglepot & Cuddlepie. I’ve still got the book, one cover is gone, and the worn-out pages are held together by sticky tape so old, it’s crystallised and gone brittle. I’ve always loved stories, so I guess it was just a matter of time before I started telling them.”

And people sure love to hear her do so. “If you want a lively, memorable, and fascinating lesson about Australian wine,” writes New York retail vino expert Jameson Fink, “there’s no-one I’d rather listen to.” Yalumba describe Jane’s role as “multifaceted”. She is, they add, not only a storyteller and brand ambassador, but “a legend”. She joined the company in 1987, after graduating in winemaking from Roseworthy College, working her way up the ranks and now serving as their “communicator at large”, to represent the company on the international stage.

“I guess being a great communicator breaks down to folks wanting to listen to what you have to say,” Jane tells me. “To be honest, I’ve never really sat down and analysed what I do, I try to put myself in the spot of the people I’m presenting to, and go from there. With any given event I do on behalf of Yalumba, I wrap up the facts of the business with its colourful characters, the local region with its food culture and history, and whatever adventures I’ve been up to lately. It seems to work!”

During the mid-1990s, Jane had a stint on the tasting bench at Rockford Winery, working for its legendary founder Robert O’Callaghan. “He is one of those of those old school Australian yarn spinners with a very dry sense of humour,” says Jane. “He could hold folks spellbound for ages with stories about why he used a 120-year-old wooden and cast iron grape crusher, run on a belt drive powered by a stationary engine, where he found these things and why it suited his winemaking style. I was lucky enough to be standing next to him for a year, soaking it all up, and not realising that I was doing a partial apprenticeship.”

Now, she says, it’s part of her “magic carpet ride” around the world, sharing stories about Yalumba’s wines, people and history. “I’ve been incredibly fortunate to have been given such a vote of trust by the Hill-Smith family to be the storyteller of their 166-consecutive-year history,” says Jane. “If someone had told me ten years ago that ‘after work’ I’d be sitting in the stalls of the West End watching a performance by living legend Helen Mirren in The Audience, I’d have said they were nutso! But that’s where the job has allowed me to go.”

Though, that’s not to say the work is not without its challenges. Travelling great distances over long periods can, at times, be a rather tough gig. Days are long, and sleep periods short. “You need a long fuse,” adds Jane, “because you’re dealing with people for up to 18 hours a day. But, would I swap it for a regular nine-to-five? Not in this lifetime! I’ve been dealt a very lucky hand, and I know it.”

Jane lists an area of Italy as her favourite wine region: “I have to go with one half of my heritage here. Our family is from Liguria, not far from La Spezia, and it has Cinque Terre – ‘the five lands of wine’ – right on its northern doorstep. The collection of villages cling to a hillside and are joined by a rough track around the cliffs which my second uncle says was called the via dei Amore – the way of love – because if you wanted to sneak out and form a romantic attachment with someone from another village, you had to chance this unlit precarious donkey trail. It’s spectacular country, and the towns are most easily accessible by sea. Plus, they make this legendary sweet wine called sciacchetra.” Jane’s favourite wine-related memory, she tells me, is drinking sciacchetra with her Italian grandmother, “as I only saw her three times in my life”.

And the best place to enjoy a glass?

“I think what’s most important is who you’re with when that glass of wine is poured. If Hugh Grant was there – long time object of my affection – it wouldn’t really matter where. Or even what was in the glass. Does that give me the emotional depth of a rain puddle? I believe it does!”