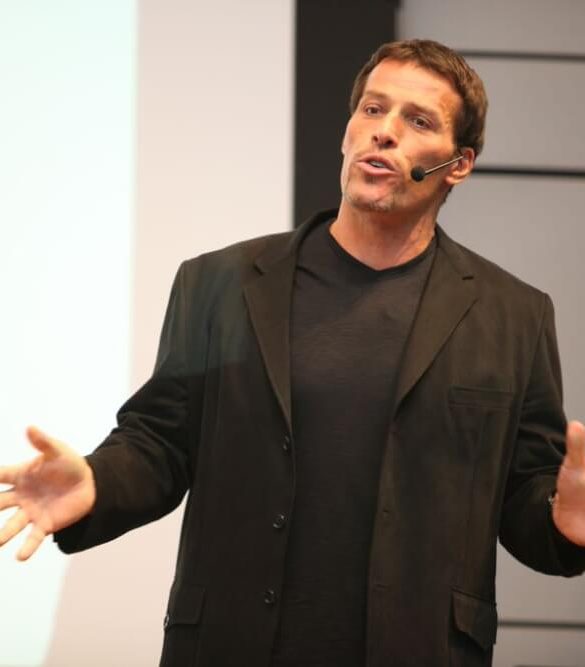 I confess to being somewhat star-struck when the world’s most successful life coach and strategist, Anthony Robbins, stormed on to the stage.

The 6’7” Robbins embraced all 1200 attendees with his beaming smile as he held his hands up clapping to the loud music. Feeling somewhat drunk on adrenalin, I could not help myself, and in an instant was also on my feet dancing to the music and waving my arms about.

My husband next to me was happy to stand, however that was all, anything else was slightly out of his comfort zone. Laughing I said to him “you will be clapping by day six”. I was wrong, within hours he too was moving as if no one was watching.

The atmosphere was electrifying and in this moment I understood why I could not wait to see Anthony Robbins in person.

His energy and obvious caring heart was a clear demonstration as to why these events are consistently near maximum capacity.

It was last October during a few days away to write and think I made the impromptu decision to one day attend a Robbins event. Having just turned 50 I was ready and willing to shift some ‘stuff’ and determined to make this my best decade ever.

Even though I had listened to and read his work for many years, I knew to attend such an event would be life changing and the perfect environment for further personal growth.

Within a week my husband and I were booked to attend the six day seminar, Date with Destiny, on the Gold Coast the following April. Gently, when the time was right, I informed him that each day was 14 hours long, adding, “don’t worry love, you won’t want to sleep, this is Anthony Robbins”.

The six days were extraordinary to say the least. We delved in to many areas: our relationships, professional lives, health and wellness, and most importantly, the relationship with our self. The content was interesting, the processes were enjoyable, interactive and effective, and, we got to dance.

Day one was like a big introductory party. Robbins commanded the stage for 10 hours straight as he set the tone for the remaining five days and armed us with the tools and knowledge to make this journey a personal success.

His energy and obvious caring heart was a clear demonstration as to why these events are consistently near maximum capacity.

Yes the days were a marathon, anywhere between 14 and 18 hours long. In spite of averaging between three to five hours of sleep each night, we were highly charged, motivated and eager to do it all again the following day. This I discovered was the magic of Anthony Robbins.

It was on the second day that everything changed for me when I heard Robbins use the word ‘excuse’. Hearing this one simple word during an intervention with a young woman was all it took to trigger my massive personal shift.

In spite of the gentle manner in which he said it, for me it felt as though a torpedo had been launched in my direction. This was why I was here; hence, I embraced the hit. From that moment on, like the snap of my fingers, everything changed.

Similar transformations occurred on a number of occasions for many of the attendees. It was a privilege to observe how Robbins worked, how he coached, how he listened, and the questions he asked. If you were open and willing, his techniques were fast and effective.

Statements such as “don’t make your life about ‘someday’. It will lead to a place called nowhere” and “you don’t worry about being ‘enough’ when you are serving”, certainly encouraged you to reflect what was important in life.

What if the things you regret the most were meant to happen?

Similarly, the right questions, such as “what if the things you regret the most were meant to happen?” or “what have you blamed yourself for which perhaps needed to happen?” were both examples of how the meaning we placed on life events might be holding us back in some way.

Each day brought memorable moments, however probably none more than relationship day, all 18 hours of it. By midnight, when many of us were ready for bed, Robbins pulled something out of the bag that electrified the room.

The emotion for the next two hours was like nothing I had ever experienced at such an event. By 2 am when the evening came to a close, sleeping was not a priority; most of us still in awe of what we had just witnessed.

Just as we did, many couples attended together. Not only was it beneficial but also very special. We were placed in separate teams, which allowed each to grow without the distraction of the other. This made coming together as a couple even better as we brought our best selves back to the relationship.

The lessons and experiences during the six days were considerably more than I could have imagined.  We explored our personal stories, our limiting beliefs and the meaning we had placed on events in our lives, all of which could be stopping us from reaching our full potential.

We were shown, and some of us experienced, how anything was possible. To be physically and emotional fit and have the ability to change was available to us all. To believe that if we let go of our fears and took the leap, the net would always appear.

Most importantly, we were reminded of how precious our lives were, and at times too short.

So what next when the time comes for the event to end? You leave this amazing environment and say goodbye to your new friends. The adrenalin slowly wears off when you arrive home to commence the normality of life again.

You certainly don’t leave empty handed. In addition to the workbooks, memories, tools and new life strategies, the most valuable gift is that you leave with new way of thinking.

As Robbins so perfectly summarized, “It is not about the goals and what we achieve in life, it is about who you become in the process”.

You come home, with a deep knowing that life will never be the same again.