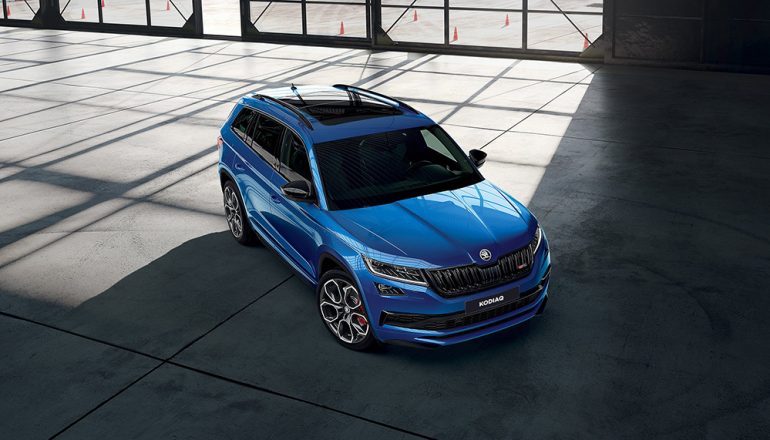 I’ve had this conversation many times over the years: “Nobody needs a car that goes that fast, costs that much, and is that low to the ground, and so on.” And fundamentally, ‘they’ are correct. From a ‘needs’ or ‘requirement’ angle, cars are essentially just another form of transport, vehicles that simply get us from A to B. Thankfully, I don’t believe that for one moment. For although there is a certain element of truth in the ‘what we all need from a car’ argument, in my not so humble opinion, it’s what we want that makes all the difference. A case in point is the new SKODA Kodiaq RS that has just been launched in NZ.

Of late, the SKODA car company has launched some really outstanding vehicles. Their current lineup caters to a large chunk of what the automotive world needs in vehicles in terms of seating and size, plus they all come with ‘Simply Clever’ features to make your life just that little bit easier. It’s a formula that’s evidently been working, as the Kodiaq has won a cabinet- (or trunk-) full of awards and even took out our very own NZMWG Car of the Year in 2017 – the first SUV to do so.

Creating well designed, more emotive vehicles is becoming a welcomed trait with SKODA, but with the Kodiaq RS, a big shot of their Motorsport heritage has been introduced too. And, having just driven it, I can tell you, it’s just what you want.

For NZ, the RS badge made the WRC headlines in the 2000s, the Octavia turning heads as it blistered around the rally stages. This success was rapidly followed by the Fabia and the subsequent R5 and the RS performance ethos introduced to their production vehicles from the turn of this century.

We met the new performance SUV out at Boomrock, near Clevedon. An intimate gathering that included a brief presentation before letting us loose on the area’s great driving roads. But I’ll get to that in a moment.

As you are probably already aware, the Kodiaq is a modern, well-appointed seven-seat SUV that’s crammed full of ‘Simply Cleverness’ that I won’t go into here, as this is more about the RS. The RS badge (with a ‘V’ in front for Victory) has received a facelift and is now racing red. It’s easy to spot but not overused on the Kodiaq. However, the SUV’s sportiness is very obvious. New bumper design with gloss black highlights that include the roof rails, window trim and mirrors. Dramatic 20-inch alloys, red brake callipers that grab your attention along its profile, while two tailpipes and a unique reflector strip garnish the rear.

For me, the hero colour is the Race Blue, but there are velvet red and a variety of other shades for you to opt for. The Motorsport theme continues inside, with carbon fibre effect trim, sports seats and a large use of alcantara that even includes the door cards.

The RS comes with an abundance of technology and driver’s comfort. The Canton sound system (and the rest of the infotainment) is controlled via a 9.2-inch screen, the instrument cluster is virtual (digital) and very personalisable, including a sports look with a rev dial in the centre.

Less cosmetic is the two-litre bi-turbo diesel engine that delivers 176kW of power and 500Nm of torque. It’s a powerful family SUV, make no mistake, that has you going everywhere fast (0-100km/h in seven seconds to be more precise). A seven-speed DSG gearbox, full-time 4×4, dynamic chassis control, progressive steering and six different driving mode settings are just a few of the great things about the RS, but my favourite is the way it drives.

Like I said, we got to explore the very involving roads that have you heading out towards Miranda, unescorted too. We got to experience both sides to this performance SUV. Its mild manneredness around the town and its highly impressive speed and handling around the tight NZ countryside. The combination of a strong chassis, great suspension, wide and grippy rubber and a very responsive and giving engine brought out the evil Edward Hyde (of Jekyll and Hyde infamy) in me. It’s just what the doctor ordered.

Despite being given plenty of time to explore the new Kodiaq RS, it was still just a taste and it left me wanting more. NZ is the first (and currently only) country outside of Europe to get the RS (that’s how much we love sportscars), and I can see people lining up to get one. In short, the SKODA Kodiaq already ticks all the ‘needs’ boxes but now it’s gone RS, it’s something you’ll most definitely want.