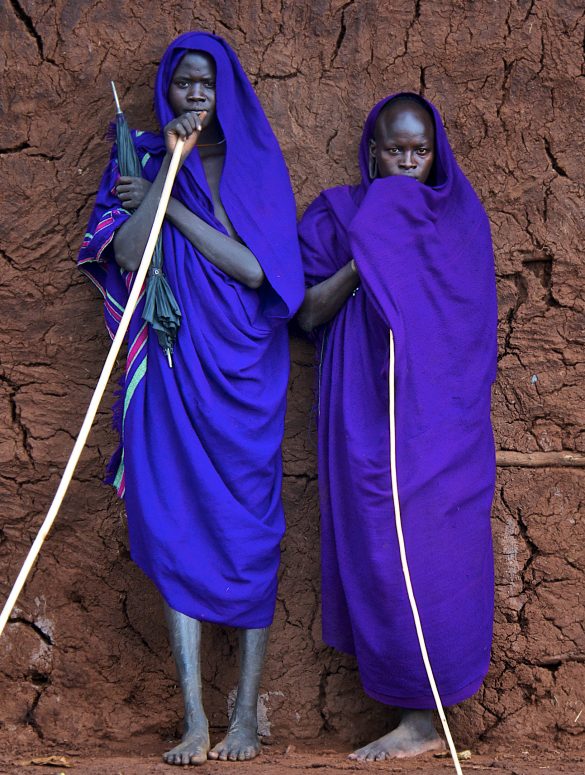 Nothing quite prepares you for Ethiopia, amongst the most extraordinary and amazing of the 170-plus countries I have visited. Breathtaking beauty, ancient history, rich culture, and the sheer diversity of people are a traveller’s dream, all set against a backdrop of rugged mountains, dramatic deserts and lush countryside. It was here the first humans roamed, and as Ethiopia is the only country in Africa never colonised, the lack of outside influence allows a rare insight into an old and original Africa. Today, the rich tribal culture and strong Coptic Christian beliefs offer an amazing contrast.

Ethiopia is home to some of the most traditional tribes in Africa. The challenges of persistent drought mean some are making the transition from a nomadic life to a more settled lifestyle, but others live much as they have for centuries. The Mursi of the remote but beautiful Omo Valley are best known for the startling clay plates in their lips that women start wearing from their late teens, marking traditional rites of passage. A somewhat confronting look, but just one indication of the remarkable depth and resilience of those traditions.

On my recent trip whilst in the Omo Valley, we learnt that the Hamer tribes-people were going to hold a ‘bull running’ initiation ceremony. This is when a young man, aged about 15 years, must run naked across the back of bulls, proving his eligibility to marry. During the event, the women of the village dance and chant — a real ‘National Geographic’ moment! We were also lucky to witness the annual Meskel Festival in Addis Ababa, with huge crowds celebrating this Orthodox Christian holiday with feasting, a magnificent parade and ceremonial bonfires.

Christianity emerged in Ethiopia centuries ago, but really took a foothold when it was declared a state religion in 330 AD. I was amazed at how devout the 65 million Ethiopian Christians were, and any visit to Ethiopia must include Lalibela, the site of impressive 12th-century churches hewn out of solid rock by hand. To go right back to biblical times, visit Axum, home of the Our Lady Mary of Zion church, believed to have housed the Ark of the Covenant. Word is, the neighbouring Chapel of the Tablet contains the Ark today. Relatively more recent history has left a legacy of impressive castle ruins in Gondar, capital of the Ethiopian Empire in the 1700s.

Add to all that history stunning natural beauty including the lunar-like salt pans of the Dallol Depression, 120 metres below sea level and from where camel caravans carry blocks of salt all over northeast Africa. The Simien Mountains — a vast cauldron of deep gorges, towering peaks, and fascinating wildlife found nowhere else on earth were a delight — especially the chance to walk amongst and witness the interaction of a 500-strong troop of the placid gelada (‘bleeding heart’) baboons.

World Journeys are running a small group hosted journey to ‘Unforgettable Ethiopia’ in September 2020, with a maximum of 18 guests, and a host to ‘smooth the way’. Go to WorldJourneys for details.